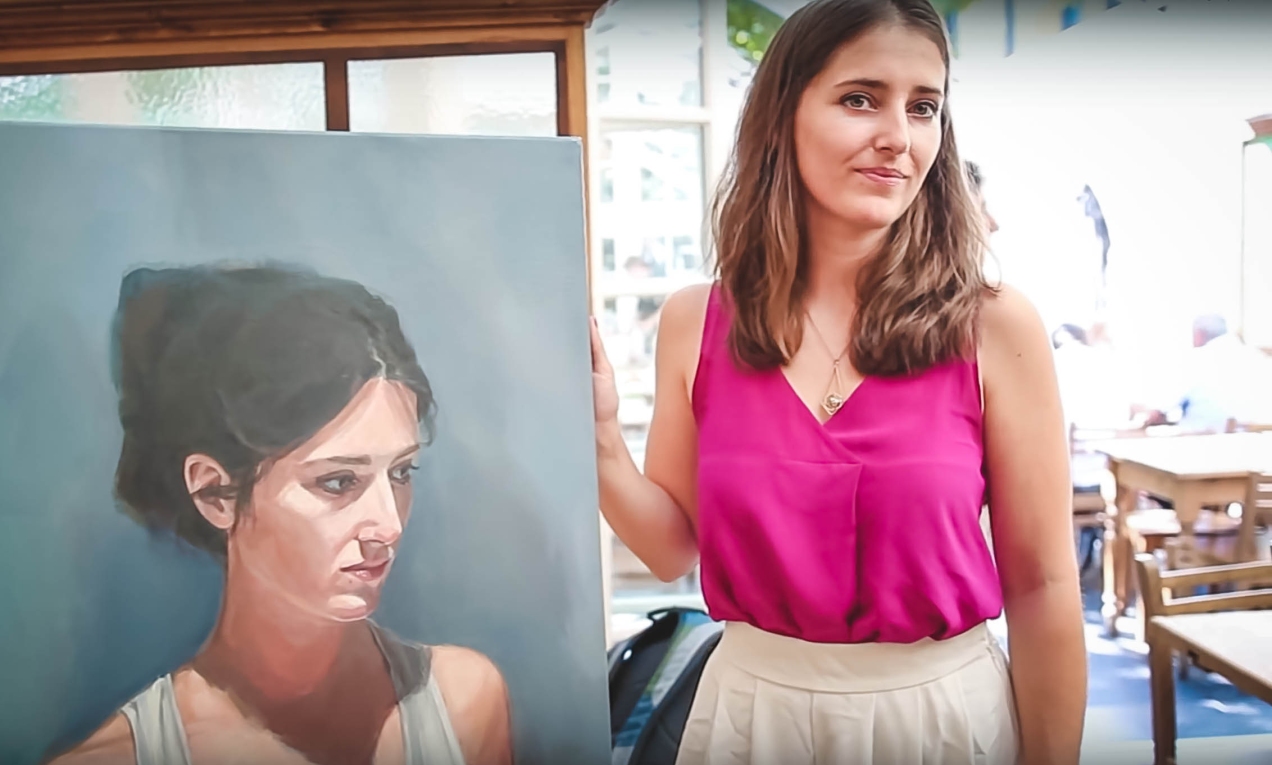 Alix Philippe is a Belgian painter who studied Comics at Institut Saint-Luc in Brussels and attended Fine Art Academy of Boitsfort in Brussels. Photographing and then painting people in markets, restaurants or stations, Alix emphasizes a moment of enigma, intimacy and rich emotional state of unknown characters, making the viewers to plunge into an unknown story. In this interview Alix tells us about what inspires her, her switch from a law career to art and art scene in Brussels.

– Your career path is very interesting, I know you used to be a lawyer before. When have you understood that being a painter is your true vocation?

– I have always wanted to be a painter but I never knew how. When you are eighteen, you are not always mature enough to take the decision to become an artist. The artistic path can seem very abstract and a complicated to start. I had been doing well at school and was surrounded by very academic people, especially my dad who is a law teacher and practitioner. That pushed me to chose a safer path; but inside, this desire to be a painter has always been there and I had that little feeling that I will find a way no matter what happens. In my last year of studies, I did an Erasmus programme in Milan and lived with a fashion designer. I got interested in fashion and decided after my law studies I would study fashion. I realized that the job of fashion designer was something pretty concrete and very creative and that I could perhaps make a living out of it. But after a year in fashion design in Brussels,  I thought that the most important thing for me was to paint and nothing could replace it so I decided to start working as a lawyer. Aside my job, I found some opportunities to create and show my paintings but it was very challenging whilst I was working in law firm. So in September 2014 I decided to quit my job and went to London to do a Master’s in Art Business for a year. I wanted to know more about the art world. After that, I had a few job experiences in the art world, in galleries and art fairs. It’s in March 2016 that I took the decision to be a full-time painter. My boyfriend was an artist as well and he encouraged me a lot in starting my artistic career for good.

– You told that previously you were more of an abstract painter. Can you tell us about the evolution of your style?

– Actually I never really considered myself an abstract painter. I made a few abstract paintings in 2010 when a friend of mine proposed me to participate in the exhibition called “Full Wind” in Brussels. The subject was very abstract to me. I sold my work, I had a lot of good comments so I created new series of abstract paintings for three other shows in Brussels. I found the inspiration in nature, particularly in the four main elements: earth, air, fire and water.

But then I came back to the figurative art as I was – and have always been – interested in filming, framing and comics as well. I studied a year in comics in Brussels also; I like telling stories through images and I wanted to learn more about the building of a storyboard.

–  Tell me about your creative process? You see an interesting image, you take a  spontaneous photo and then?

– I have been based in London for three years. I think I became a street artist here in the sense that I take a lot of pictures in the street which I use to create my paintings.  London is an amazing city where you can find numerous areas with different colours and people of different cultures. I was inspired by the city so I started taking a lot different pictures and using them for my paintings. Usually I take pictures of girls walking around London in markets or stations, wearing beautiful clothes. Then I compose painting using those photographs as basis. For example, I have a painting called “La Fille au Bouquet”, I saw this girl with a beautiful bouquet from the flower market on Columbia road, she was very fresh and elegant. Then I used my tube station in South Ealing for creating the  background of the painting. I like the process of composition – cutting the pictures, composing the background, taking off or adding elements. The light is very important for me as well.

It is a lot of work, I spend a lot of time working on a painting. I do not impose any story behind of the painting because I want people to invent the story themselves. – You have already mentioned that you studied at Sotheby’s Institute of Art in London. Could you tell us more about your studies? Have they helped you in real life? Sometimes for artists it is quite difficult to be a businessman, to do marketing and to do art at the same time. Do you think that the artists should do this work themselves or they should let the professionals do the job?

– It is very hard to start an artistic career so the easiest way would be if someone proposes you to represent you but usually it does not happen like that. My master’s in Art Business helped me obtain a good overview of the art world and I met a lot of interesting people from this world. It is never easy to understand the “codes” of this particular world.

I quite like the fact that the galleries exist because being an artist is not being an art dealer so it is good when your are represented by someone who can take over the commercial aspect of your activity. You don’t have to do all marketing, sales etc by yourself. At the same time it might be a problem because you have more barriers… If you do not have a gallery that represents you after ten years of work, that does not look good. That’s the tricky part.

– How can you describe the art scene in Belgium, and in Brussels particularly?

– I have just moved back to Brussels from London so I do not know it very well but I like Belgian public. I participated in The Accessible Art Fair in September 2016 and noticed that people are very open. They do not expect you to have an extraordinary CV, or degree from the best art school. Here, in London, if you go to good gallery, you see that the majority of the artists attended very good art schools. Art schools have the advantage to offer you a network and you have to make the most of it. Colllectors usually go to school shows. In my opinion, they have more chances rather than autodidact artists. London is an important marketplace , you will find more art collectors but in Belgium people buy more with their hearts I think… They can be surprising. I guess London is also much more competitive.

-Yesterday you sold one of your major paintings. Do you feel sad giving away your «kid»?

– This afternoon I sent off my “Sloane Square” painting and I am actually happy that it will stay in London. It is a good feeling to know that your paintings are spread in different places and countries.